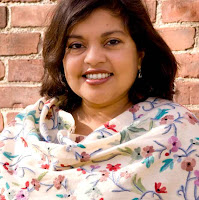 Her subtitle is "not your mother's publishing industry," and she is starting off with a poster from the movie Risky Business. Suddenly, some people in the audience begin to feel old.

Mitali has just taught us how to say hello in Boston. Surprisingly, you don't throw a can of beans at someone when you say, "HOW YA DOIN'?" Oh, Boston, I kid.

Now Mitali is telling us about how stories, information, and art are moving from the printed page to the screen. (In related news, she tells us about the joke she kept out of her Twitter feed, but that we're putting right back in. Ahem. "iPad! It's that time of the month!")

She just mentioned the new Figment.com, where you can submit stories you write for cell phones. Check it out.

A second change: kids and teens want to personalize and interact with everything (including authors and illustrators).

Influence is shifting from traditional reviewers to trusted curators (though big-name old-media reviewers such as Roger Ebert remain powerful as they move to new media).

There's a power struggle over which stories and art get sold and how. An example: the Macmillan/Amazon.com power struggle. (Macmillan FTW!)

UNEXPECTED TRIVIA BREAK! Mitali weighed 11 pounds when she was born. They wrote newspaper articles about it. Her head had its own weather system. Also, her parents dressed her in boys' clothes.

Now Mitali is talking about coming to the United States and how it felt to be in a California middle school while living in a traditional Bengali home. Despite her efforts to achieve Farah Fawcett hair, no one talked to her at school for two months.

Her life changed when she was invited to be a lunch table Uhura. It was a transformative seventh-grade experience.

You can follow Mitali online at her blog and her twitter feed. (And if you were at the conference, you would be writing down her secrets of creating a vision statement--everyone is frantically scribbling right now.)
Posted by Martha Brockenbrough at 9:49 AM