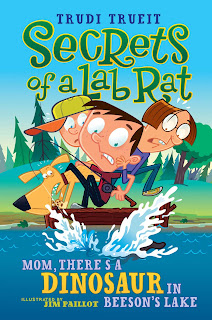 She writes: "School Library Journal gave a nice nod to my second book in my Secrets of a Lab Rat series: Mom, There's a Dinosaur in Beeson's Lake (Aladdin, ages 8 to 12). The book was released in hardback in February. The cover is attached if you'd like to use it.

"Scab McNally is back in this laugh-out-loud volume. With high energy and ingenious ideas, the 10-year-old skates (just barely!) through one sticky situation after another. The plot focuses on a dinosaurlike creature he spots while fishing with his buddies, but nonstop goofiness, plot-related or not, is the real draw here. Cartoon drawings and plenty of sidebars full of Scab’s secrets, tips, and other hilarious insider information break up the text. A solid step up from Captain Underpants." –Amanda Moss Struckmeyer, Middleton Public Library, WI

Any time I'm called a "solid step up from Captain Underpants," I'll take it!

The third book in the series: Scab for President, Vice-President, Secretary, Treasurer? will be released in the spring of 2011. Seriously, that's the title. On my series proposal, I just threw this one in at the bottom of the page as a possible title because I thought it was funny, not because I had any ideas for a book. Naturally, that's the one that caught my editor's eye. "Let's do that one," she said. It's the first time I've ever written a book to fit a title! That will show me to be flip and cute on my proposals."

Posted by Martha Brockenbrough at 5:46 AM