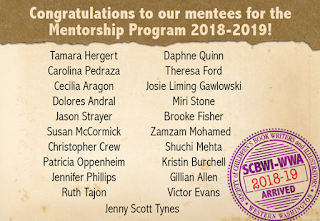 We are pleased to announce our mentees for the 2018-2019 Mentorship Program. In the program's second year, twenty one writers will work one-on-one with a published author to analyze every aspect of their manuscript for a six-month period.

This year, we also have two winners of our Inclusivity Scholarship. They are Dolores Andral and Ruth Tajon.

Thanks to all the entrants! It was difficult for the mentors to choose from so many excellent applicants. We look forward to reading more fabulous work by local writers next year and foster talent by establishing relationships with great mentors.

Ailynn Knox-Collins started working life as a lawyer, then moved on to be a teacher, and is now a writer of children’s books. She has an MFA in Writing for Children and Young Adults from Hamline University. She mentors young writers through the Society of Young Inklings and has been a member of SCBWIWWA since 2008. She has published a series of 6 MG science fiction books called Redworld, and is working on 2 more for another series, coming out next year. She has a graphic novel, and a nonfiction picture book out in the world, seeking a home.

Sundee T. Frazier is the Coretta Scott King Award-winning author of Brendan Buckley’s Universe and Everything in It, The Other Half of My Heart, and the Cleo Edison Oliver books. Her heartfelt, entertaining stories address subjects close to her heart: biracial/bicultural identity, growing up in interracial families, and multi-generational dynamics. Her books have been nominated for twelve state children’s choice awards, appeared in Seattle Public Library’s Global Reading Challenge, and been nominated for the WA State Book Award. Frazier, a graduate of the Vermont College of Fine Arts, lives in Renton, WA. Learn more about her and her work at www.sundeefrazier.com.

Suzanne Selfors is a national best-selling author who writes for kids of all ages. She’s received six Junior Library Guild awards, earned starred reviews from Kirkus, School Library Journal, Library Media Connection and Publisher’s Weekly. The Sasquatch Escape won the WA State Book Award, was an Amazon Best Children’s Book. She’s won a Cybils award and been on numerous state lists including the Texas Bluebonnet list. Though her books can be found all over the world, she lives on an island in the Pacific Northwest where she hopes it is her destiny to write stories forever after.

Jillian Anderson Coats is the author of The Wicked and the Just, one of Kirkus’s Best Teen Books of 2012, a 2013 YALSA Best for Young Adults (BFYA) winner, and a School Library Journal Best Books of 2012 selection. It also won the 2013 Washington State Book Award for Young Adults. Her newest book is R is for Rebel, a middle-grade novel about coercion and resistance in a reform school in a fictional occupied country. She is also the author of The Many Reflections of Miss Jane Deming, a 2017 Junior Library Guild selection and one of Kirkus’s Best Historical Middle-Grade Books of 2017. Kelly Jones worked as a librarian and a bookseller before becoming an author. Her first book, the middle grade contemporary fantasy Unusual Chickens for the Exceptional Poultry Farmer, was an Indies Introduce Pick, an ALA Notable Book, an SLJ Best Book, and a Kirkus Reviews Best Book. Her second book, the YA Regency fantasy Murder, Magic, and What We Wore, made the 2018 Amelia Bloomer List of the best feminist books for young readers and received a starred review from School Library Journal. You can find her at her website: curiosityjones.net, or on Twitter and Instagram: @curiosityjones.

Kevin Emerson is the author of numerous middle grade and YA novels, including the Chronicle of the Dark Star series, and the forthcoming ANY SECOND. His recent release, LAST DAY ON MARS received starred reviews from Kirkus and Booklist, and was selected for ALA’s LITA List for science fiction and the TLA Lone Star List. Kevin is a former K-8 science teacher and teaching artist with Writers in the Schools and Richard Hugo House. He has won a spelling bee, lost a beauty pageant, and once appeared in a Swedish TV commercial. Learn more at http://www.kevinemerson.net/.

Clare Hodgson Meeker is an award-winning author of 11 published books for children including the Spring 2016 Junior Library Guild Selection Rhino Rescue! And More True Stories of Savings Animals, the Smithsonian Notable Book Lootas, Little Wave Eater and Soccer Dreams: Playing the Seattle Sounders FC Way. Her next book, Growing Up Gorilla, published by Millbrook Press, is scheduled for release in the fall of 2019.
Clare teaches writing in schools throughout the Northwest. She is a frequent speaker at conferences and will be presenting at the 2018 Southwest Washington Writers Conference in September. She is also a member of the literary nonprofit organization the Seattle7Writers.

A former software engineer, Laurie Ann Thompson writes for young people to help them better understand the world we live in and make it a better place for all. She strives to write nonfiction that encourages imagination and fiction that reflects universal truths, as seen in Be a Changemaker, an inspiring how-to guide for teens; Emmanuel’s Dream, a picture book biography of a man who changed perceptions of disability; My Dog Is The Best; and the upcoming Two Truths And A Lie series for middle-grade readers (co-authored with Ammi-Joan Paquette). Learn more at lauriethompson.com and on Twitter at @lauriethompson.

A self-described research junkie, J. Marin Younker worked as a public librarian for thirteen years, spending most of that time working with teens. Earning a degree in History from Western Washington University, Marin went on to graduate school for an MLIS at the University of Washington. Marin now lives in the Seattle area with her family and animal menagerie. Her first book, Bleed, Blister, Puke, and Purge exposes the dirty secrets behind early american medicine.
For more information, visit odddelights.com or follow her on twitter at @odddelights.

Years ago, Lois Brandt peeked into her best friend’s refrigerator and found empty shelves and one small carton of milk; her friend’s family didn’t have enough money to buy food. Maddi’s Fridge, Lois’ first picture book, is the result of that moment. Maddi’s Fridge has been universally praised by teachers, librarians, parents, and –most significantly — young readers. It is the recipient of a 2014 Christopher Award and the International Literacy Association’s 2015 Book Award for Primary Fiction, among other honors. When she is not working on her own projects, Lois teaches writers of all ages, helping her students tell the stories they hold close to their hearts. Learn more at https://www.loisbrandt.com/.

For 35 years, Peggy King Anderson has taught writers of all ages. She loves it!  She was awarded the SCBWI (W. WA) Lifetime Achievement award in 2012. She’s taught creative writing both in colleges, and in conferences ranging from SCBWI, to the Highlights Foundation Writers Workshop in Chautauqua, New York. She has four published books, including THE FALL OF THE RED STAR (co-author, Helen Szablya), featured on Children’s Book TV. Her MG historical fiction novel, TWO MOON JOURNEY, is due for publication in fall of 2018. She writes a monthly fiction series, TREE FROG TRAIL, for Pockets Magazine. Check out Peggy’s website at www.peggyking.com

Kevan Atteberry is a writer and illustrator of award-winning children’s books. Before breaking into picture books —a lifetime goal of his—he spent decades running a graphic design studio, owning a greeting card company, and toying with fine art. . His books include, Bunnies!!!, Puddles!!!, and the recently released I Love You More than the Smell of Swamp Gas. Among books he has illustrated for others are Halloween Hustle by Charlotte Gunnufson, Tickle Monster by Josie Bissett, and Frankie Stein by Lola Schaefer.
But Kevan’s biggest claim to fame may be creating Clippy the Paperclip, the Microsoft Word helper. At one point it was annoying hundreds of millions of people a day. He finds an odd kind of pride in this…

Amy Hevron is an illustrator, designer, and children’s book author living in Seattle, Washington. She is a two-time winner of the Portfolio Honor Award from the SCBWI. She illustrated Trevor written by Jim Averbeck coming in 2018. And her author/illustrator debut Dust Bunny Wants a Friend arrives in 2019. Prior to focusing on children’s books, Amy worked as an art director at design firms and game companies. She is represented by Kirsten Hall of Catbird Agency. Amy’s portfolio can be viewed at www.amyhevron.com. Erik Brooks is the author and/or illustrator of many books, including the Washington State Book Award winner, POLAR OPPOSITES, and the CBC/IRA Children’s Choices award winner, THE PRACTICALLY PERFECT PAJAMAS. His most recently illustrated board book, IF I WERE A WHALE, will soon be joined by two additional titles. From his home in Winthrop, WA, Erik also writes and draws a weekly comic strip for his local paper, visits schools and libraries around the country, and plays in the woods like a wolverine! View Erik’s portfolio at www.erikbrooks.com
Posted by Kim Baker at 12:20 PM

Thanks for the opportunity for some 1:1 support as I march forward with my picture book biography!