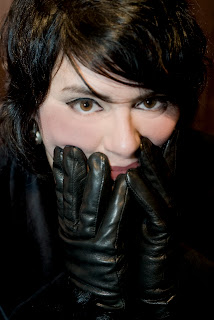 HOLLY BLACK is the best-selling author of fantasy books for kids and teens, including the SPIDERWICK CHRONICLES. Her latest is the CURSE WORKERS series, which begins with WHITE CAT. RED GLOVE, the second in the series, was just released.

"I believe that characters are the beating heart that animates the plot."

Holly has found herself asking these questions when writing and thinking about plot:

-How do you KNOW what scenes are the right ones?

-How do you CHOOSE what your character does?

How do you figure out what happens next?

When you are deep in the character's head you can get stuck. When you're plotting sometimes you need to figure out how to take a step back and see the bigger picture.

If you look at most books, they begin and end with subplot. It's the interaction between the plot and subplot(s) that makes the story.

"Talking out loud made me think differently than I actually thought." Holly realized this was how she could get at the shape of story. She's using her brain differently while speaking out loud and talking plot through. It also allows people to ask questions. She also feels more freedom to try out a crazy idea.

Holly Black has just called E. Lockhart on stage to talk out plot! Too fun.

It helps to talk plot out because you don't feel committed to as much as you do when you write it down. It frees you.
Posted by Cuppa Jolie at 5:00 PM