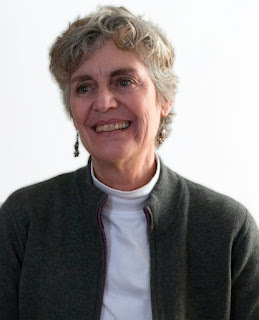 Her latest, LOVING VS VIRGINIA is a novel-in-verse about the landmark Supreme Court ruling on interracial marriage.

She talked about researching this book, down to such details as the weather for a particular day in history to help set the scene. In Loving, for example, the day the couple was arrested in bed was a hot one that followed a rainy one, so she knew that would make the air steamy.

She uses a variety of information sources to write, but one of her first stops was a surprising one: "A lot of people hate Wikipedia. I love Wikipedia," she said. "It may or may not be accurate. But it can be extremely useful." It gives initial information right from the get-go, and it has a bibliography that leads her to books with more bibliographies that lead her to primary sources.

She starts with secondary sources and moves onto primary sources. 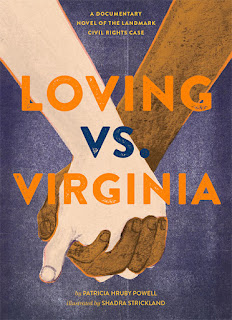 Sometimes, sources are in conflict. The Baker expert the publisher hired believed Josephine was born in East St. Louis. But Patricia knew this was incorrect; that she was born in St. Louis. She proved it by finding the hospital where Baker was born and the street she lived on.

She explained to us what a documentary novel is: Creative Nonfiction. LOVING VS VIRGINIA is written in verse, and it's an informational text. There's a lot of accurate information in it because she used primary sources, but it's told in the voices of Richard and Mildred, and these voices are fictional, even as they are authentic.

She interviewed Mildred's older brother and Richard's best friend, among other things. Some people hung up on her when she called. "Can't you just leave well enough alone?"

It made it harder to call the next person, she said. "But you just do it."

Meanwhile, the younger generation wanted the story hold. So she went to the town. To the diner, to the library. To the convenience store on Sparta Road at 6:30 at night--which is where she found Richard's best friend, Ray Green. She got incredible stories that she couldn't have found anywhere else doing this.

For example, Mildred's father and brother's band had a gig at a white school. Ray Green and his girlfriend and Ray and Mildred tried to go in--it was her family, after all. And she was barred, and that was the first time Richard saw what it meant to be black.

Photographs are also important research. You might find every photograph you need at a small historical society archive, if you're doing something focused. But for a broader topic, you might start at the Library of Congress.

She also spoke about how she organizes her information. She generates notes on a computer using regular Word documents. She makes a template with 8 card-size spots for taking notes. She files it away in a traditional card holder. But she can also find it again on her computer. She also has color-coded three-ring notebooks and calendars for years she uses. This grounds her on the day of the week that an event happened. She has transcriptions of interviews, obituaries ("you learn a lot from obituaries").

Posted by Martha Brockenbrough at 1:52 PM

Thanks, Martha! I couldn't go to this one, but I'm grateful for the summary!