David Small and Sarah Stewart are longtime collaborators on picture books and life. In this session they discuss each of the six picture books they've produced together. 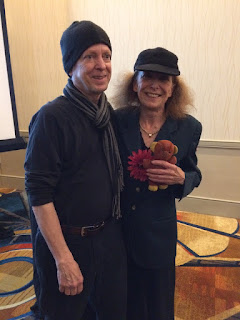 So much of this session is the endearing interaction between these two book creators, so I will share some tidbits of information gleaned from their back-and-forth. 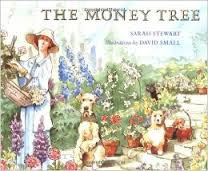 Sarah wrote The Money Tree after returning to Texas for her mother's funeral. Stories can come from the great, big, overwhelming, momentous, profoundly troubling moments. 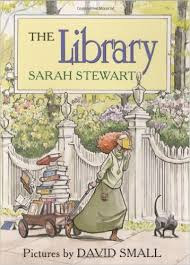 David: Why did you make me illustrate a book a book about a character who does nothing?

Sarah: What happened that made you change something that wasn't quite right to something just right?

Having thought he'd done his job and that he had a solid dummy, David sent it off, but received feedback that it was not quite right. David recalled a comment of Sarah's about wanting it feel more like a library: safe. He also was struck by the work of Arnold Lobel and he took the art that had been bleeding off the page and tightened each so it were contained. Safe. 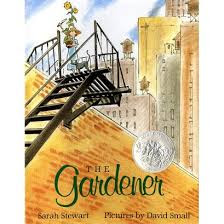 David: What's so interesting about THE GARDENER?

Sarah shares that the book was inspired by Lydia Grace Finch, a true gardener and artist. At six years old (during the depression), Lydia was put on a train to live with an uncle she'd never met, where she made gardens on the roof.

There was a darkness during the depression and David didn't want the darkness to creep it's way to Lydia as he was doing the art. He left lightness around her and he discovered that was what the story was all about, which made him look at the story differently. David has since used that halo effect in other stories, but it came first in The Gardener. 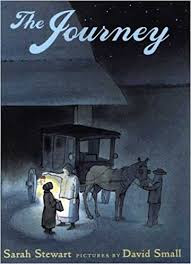 David and Sarah live in Amish country and have Amish friends. This story was inspired by one told to Sarah by one of those friends.

Sarah shares that David broadens and deepens this story with his work. 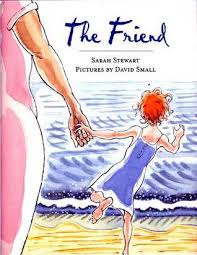 David: Speaking of books that are hard to illustrate.

David says this is the hardest book he's ever illustrated, partly because he knew all the backstory, a story based on his wife's life and her near drowning as a child and the woman who saved her. 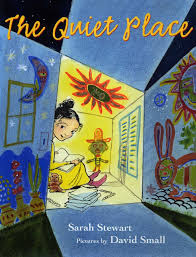 It's pretty clear now that people inspire Sarah Stewart's stories, and The Quiet Place is no different. And Sarah shares, "And oh can David Small paint."
Posted by Cuppa Jolie at 2:14 PM