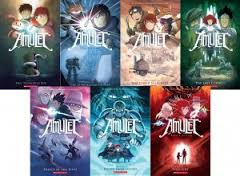 Kazu threw a lot of the typical writing tools out the window (like the three act structure) and thought about the experience design. He wanted the story to feel like a ride.

Kazu liked writing essays in high school and he often organizes his book that way.  He creates a one page, bulleted synopsis, that almost entirely changes, but it helps to guide him. He lets himself follow the characters and see what they are going to do.

Kazu writes his books out of order. He goes to the scenes that are clearest in his head. He only lets himself think of one scene at a time so they don't muddy together. Instead each gets focus and he tries to make each a really good short story.

When looking at dialogue, if Kazu can't tell who is saying what, he's doing it wrong.

Cool fact: The font in the Amulet series is based on Kazu's handwriting (all except the first book which he hand-lettered).

Kids love to sort stuff out. Kazu tries not to answer everything, instead he tries to get kids to ask questions instead.

As the series continued, Kazu kept pushing the environment.

And while Kazu takes questions, he also gives a live painting demonstration. 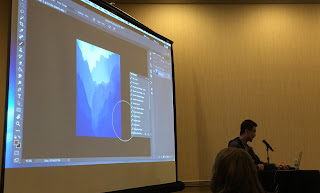