David Small: a conversation with 'the kid who could draw good' 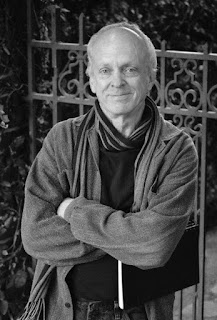 David Small has won a Caldecott Medal, two Caldecott Honors, two Christopher medals, and has been a finalist for the National Book Award, among other honors.

He has illustrated picture books (more than 50!) and written and illustrated the searing graphic novel STITCHES, based on his own life.

He sat down with a Q&A with Dana Arnim, and here are some highlights of his story:

He trained as a fine artist for years, first at Wayne State and then at Yale. His fantasy was to have a gallery show--but this was a time when galleries were full of abstract art and his skill was figurative art.

He got a teaching job and thought that's what his career would be. But in the 1980s, the Reagan recession hit. "I don't know if anybody remembers that era ... it was when people on Wall Street couldn't get enough coke up their nose and everything seemed rosy until the economy crashed."

He lost his job, and at the age of 38, he and his wife Sarah Stewart were left with nothing. The next five years were hard. "I had one skill, which was drawing. And I began to do what was anathema to all art students in the 60s and 70s. And that was sell out."

He found work at the New Yorker, and he also wrote a children's book that was bought by the old Macmillan company. That led to more jobs in that field. He didn't take it seriously yet until he did Imogene's Antlers. It got accepted by Reading Rainbow--David didn't even know what it was. "The next best thing to selling a book besides the Caldecott," his editor said. And he said, "Oh! What's the Caldecott."

He quit his job at the New Yorker. He missed the work and sometimes strained against the requirements of the children's book world. Meanwhile, Sarah had written books that were doing well.

They even have collaborated on work. Sarah wrote a text that was so perfect. "It needed not one word changed." He also knew the background, and wanted to do the story justice. It took two years for him to find the style in which that book was written.

They don't work together, though. "It's better to keep our relationship the old fashioned type. The author turns in a story to the editor, who gives it to the illustrator, and the editor acts as the go-between."

He worked many years without an agent, and thought that was working for him. But his editor reminded him that she represented her company's interests. He signed with Holly McGhee for many reasons: that she was a good person, she had experience as an editor, she knew what was fair pay and when to argue, and many other intricacies of the business. "She seemed like a person who could bring some business clarity to my life." Another thing: "She didn't need money. She was not desperate for money at all. She doesn't have to do what she's doing. She loves kids' books and that is her whole aim."

He described some relationships that haven't been as successful for him, and these were with people who were desperate for money, and with people who wanted to be doing other kinds of work. Those were good learning experiences.

His graphic memoir STITCHES recounts a serious childhood illness caused and ignored by his parents. He worked on it for many years—"writing prose was just torture for me." Holly McGhee loved it and encouraged him, but he for a time dropped it. Then he started having strange dreams and unaccountable anxieties, and when he was in Paris to visit an illustrator friend, he saw a graphic novel the friend's son was working on.

"I'm never going to do one of those. Too many drawings," he thought. The illustrator handed him a stack of European graphic novels. "I found brothers in the work," he said.

"I began thinking, hmm. Maybe I could do one of these."

He and Sarah went back home. He'd work during the day on picture books in his studio, and at night, while Sarah was at tai chi, he would have a martini, sit at the kitchen table, and try to bring his childhood family back to life."

He thought he would find out whether he was chronically depressed, "or whether I had reasons for being so completely fucked up."

"I started to bring my family back to life on paper. I had this technique that I thought I'd discovered, but found out since it's used by many therapists."

He remembered a lamp in his living room that he used to draw under. "When I had that in my mind, I could see the faux French provincial table that it rested on. And then I saw the texture of the rug and the sofa that my mother had spent a fortune on. The whole stage set was there. And then the ghosts began to came in."

"I became so tense. One night Sarah and I had gone out to dinner ... and we had gotten our wine, and Sarah was trying to engage me in conversation and I couldn't speak. I had this pressure in my neck and my voice disappeared completely."

"Sarah looked at me and said, 'Darling, what's wrong with you.'"

There was a lump in his neck. It was the size and feel of the cancerous tumor that had been in his neck when he was 14, a tumor given to him by his radiologist father who'd blasted him with radiation.

He took his hand away from his neck. They didn't know what was going on. He went to the mirror in the men's room and saw himself at 14 with a lump in his neck. He didn't know what it was. "As I stood there gripping the edges of the sink, I said, 'You can either die right here in the men's room of the Fisher Lake in, amid the smell of the cherry-scented urinal cakes'... or you can really start getting going on this book and find out what the hell is going on in your life. That was the moment I knew I had to make this book." 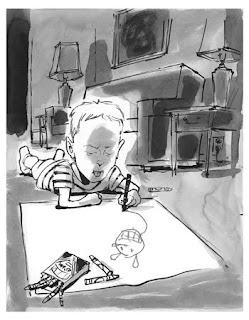 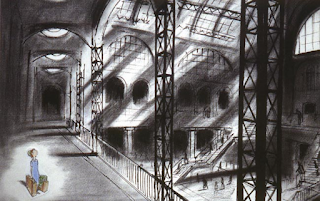 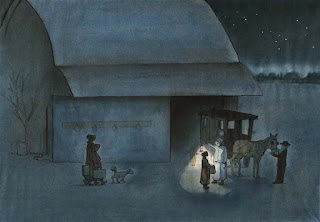