Despite technical difficulties, the Bainbridge Island Museum of Art (BIMA) hosted a lively evening with Richard Jesse Watson on Sunday night. His lecture and gallery reception not only highlighted the creative process and his own artistic journey, but proved that a great storyteller doesn't need a projector to hold an audience spellbound––especially when describing his first siting of Susi, the love of his life, in junior high. 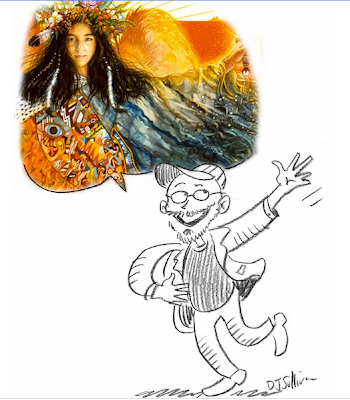 The exhibit, Richard Jesse Watson, Inner Zoo, Outer Orbit, on view through January 5, showcases 30 years of RJW's amazing children's book paintings as well as playful sculptural works that will either give you nightmares or visions of sugarplums.

Jennifer Mann then led SCBWI members through a freezing cold evening to the farthest possible bar on the island, the Harbour Public House ("The Pub") for food, drink, and a loud and wide-ranging discussion about politics, painting, and potato fries. Islanders tried not to rub it in when the mainlanders had to run for the ferry. We had such a good time that one cell phone and one set of keys were lost (since found, by amazing grace) and one of the hosts ran out on his/her bar tab (since tracked down, but under litigation).
This show at BIMA is not to be missed! Call RJW with at least an hour's notice and he will join you for drinks afterwards.
––Tina Hoggatt and Dana Sullivan