This year we featured four local talents who make us proud:

On their first successes:

Deb Lund's TELL ME MY STORY, MAMA was her first book. She submitted directly to the editor in chief and got a call from an editor while she was in the bathtub. 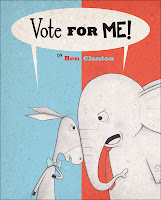 Ben Clanton: He was featured on the blog 7 Impossible Things before Breakfast, and from there attracted the notice of an art director. He had a picture book called DON'T EAT ME about a turkey with plans of his own, which morphed into a book about sparring donkeys and elephants (Ben finds turkeys to remind him of politicians, for some reason).

Kiki Hamilton: She started writing five years ago and met an agent at the conference. The agent didn't love the first submission, but asked for revisions--plus a submission of another book Kiki had been working on. Susan Chang at Tor Teen (on our faculty this year) bought it, and afterward, was able to visit London, where her book is set.

Stasia Ward Kehoe: Success is a five-letter word for her ... SCBWI. "I wanted to be a writer but I didn't know how," she said. This is her tenth conference in a row (she even came the year she had a baby). After hearing Ellen Hopkins speak about novels in verse at a conference here, Stasia had a breakthrough on how that might work with her story idea, which began as a monologue.


On the most enjoyable part of the writing/illustrating process:

Stasia loves to sit at her desk almost every day and work. "Doing the work is the most fun part," she says. "When you feel like you've finally captured that character and you ask, 'And then what happens' and you know is a total high."

Ben likes the first moment of inspiration, when the idea comes "and it's perfect and brilliant and you know you're awesome."

Deb has a couple of favorite parts: where you're oblivious to anything else that's going on because you're so into it. "The other part I really love is part of the revision process where I'm collaborating with an editor. Then you have a partner in this process."

How long did it take to get published?

Deb submitted something when she was 25. It got rejected--and it took her another 15 years to try again. She started taking it seriously when she was 40 and pregnant and knew she wouldn't have time.

Ben started writing 4 1/2 years ago. He was a college sophomore. He was really into social justice and wanted to pass along important messages to kids. He got to know the market better and started drawing, and has been doing as much as possible since. "As much as posisble, I'm trying to create."

Kiki started in 2005, when HARRY POTTER AND THE GOBLET OF FIRE was coming out. She bought the first book when she was on a family vacation, and she wouldn't get out of the car until she finished. That reminded her how much she loved to read. "Harry Potter took me back to how wonderful it was to get lost in the pages of a book." So she set out to write a story for her daughter, then 10. Then she started taking classes and joined a critique group, got an agent in 2008, and saw her book on the shelves in 2011.

Stasia had a job at Random House and used to read all the books she could find. Though she grew up thinking her sister was the writer in the family, it occurred to her that's what she'd like to do. Life was busy--she had four kids and not a lot of time, and got lots of rejections, but persisted.
Posted by Martha Brockenbrough at 12:21 PM