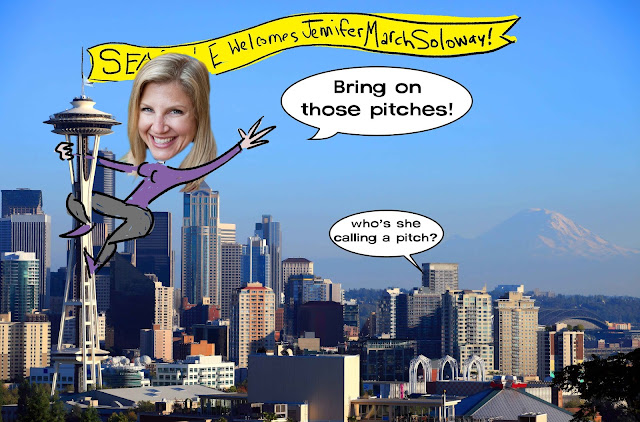 Also known to us mortals with feet planted firmly on Earth as Jennifer March Soloway, Associate Agent with the Andrea Brown Literary Agency.

I had the pleasure of Skyping with Jennifer and it was like chatting with a friend I've known for many years. Conversation was easy, informative, encouraging, and, well, fun!

You might think I wanted to jump right in and pick her brain about submissions, what kind of projects is she looking for to add to her list of clients, and all the usual "oh my gosh I'm talking to an agent" type of questions. But no. For those who know me, I had to ask Jennifer about Sugar. Yes, I love to bake, but this is a different kind of sugar.

Meet Sugar, an English Bulldog. A pup of this stature named Sugar begs the question, "Was she named after the character in Some Like It Hot? But, alas, no. Sugar is a compromise name between her two sons. One wanted to name her Cupcake. The other wanted Toothpaste. So, it only makes sense that Sugar would follow. Is there a cupcake-flavored toothpaste? If not, maybe there should be.

Before I jump head first into the inner workings of Jennifer's agent psyche, I want to share some of her fun facts:

Jennifer is an avid runner. And when I say avid, I don't mean the weekend warrior out to run a 5K. That's chump change for Jennifer who has run the Boston marathon and has qualified to run again in 2017. She runs five days a week to "clear her head." Eeck gatts! My head is getting foggy just thinking about traveling these distances -- on my feet and with some semblance of speed. Hats off to Jen Solo!

But with a running schedule like this she can enjoy her favorite foods, guilt-free. Some of her favorite things are steak, sushi, Greek, Italian, and Thai. I'm getting jet lag just writing this list. Jen also has a "horrible sweet tooth" and she loves ice cream. Wait, no, that's not right. She lu-HUVs ice cream - her all time "great weakness." As if that wasn't a vice enough, she also admits to drinking too much coffee. In particular, a blonde bitter latte. Psst, I'll clue you in on what that is ... a regular latte, no sugar, low fat. And don't even think about treating her to Starbucks. Jennifer is a Peet's kinda gal. As in she loves Peet's almost as much as she loves ice cream. Oh, and beer or wine? Neither. Jennifer prefers good ol' fashioned H2O.

When Jennifer is not running she likes to ride her bike all around the city of San Francisco. There was a time when she taught spinning classes. She loves to engagein races for the camaraderie with a group of like-minded individuals. And when she wants to opt for more wheels, she drives a Mini Cooper.

A super fun-fact is that Jennifer is a retired amateur boxer with a 1-1 record. She even fought a lady who eventually went pro. After boxing for a year, she taught boxing as an aerobics class.

Jennifer had the opportunity to live in Denmark for three months and consequently, loves all things Danish - including Danish and Scandinavian literature and commercial fiction and television. She suggests checking-out the Danish show, The Bridge, on Amazon Prime.

One of Jennifer's previous jobs was working for a toy company. She worked with toy inventors, touring the country listening to their pitches and attending toy inventor workshops. Once she found a toy she liked, she would then pitch the toy to her company, and if they liked the toy, then Jen would negotiate the contract. Eventually, she left the toy industry and went back to school to get her MFA in creative writing. But it's agenting that is her passion.

Stay tuned for more from my interview with Jen Solo. I'll share her thoughts on what she's looking for, what she likes, what her pet peeve is, and who she's inviting for dinner!