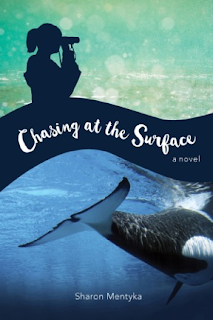 Come help me CELEBRATE the release of my debut novel for middle-grade readers, CHASING AT THE SURFACE, out on October 4, from WestWinds Press. After her mother unexpectedly leaves home, twelve-year old Marisa struggles with her feelings of loss and abandonment just as a pod of nineteen orca whales―mothers with their new calves following a run of chum salmon―become trapped in the enclosed inlet near her Northwest home. Marisa’s journey to help the whales find their way home brings her to a new understanding of the assaults humans have had on nature, and the complicated meaning of family and home.

Sharon Mentyka is a children’s writer, designer and educator, with an MFA in Writing from the Northwest Institute of Literary Arts (NILA) Whidbey Writers Workshop. Her stories and essays, for both children and adults, have appeared in numerous literary magazines including ColumbiaKids, Cricket and Soundings Review. B IN THE WORLD, an illustrated children’s chapter book about a gender non-conforming child was published in 2014. CHASING AT THE SURFACE, a middle grade novel inspired by a 30-day visit of orca whales to an enclosed inlet in the Pacific Northwest. Dan Richards teams up with celebrated artist, Jeff Newman, to share a funny and vibrant picture book about how powerful a child's imagination can be with a little encouragement. Evan asks a simple question, Can one balloon make an elephant fly? At first, his mother is too busy to answer. But when she takes the time to play the game with her son, magic happens.

Would love to see you there!

When Paxton C. Heymeyer’s babysitter tells him to say the magic word, she could never have imagined that what would happen next would be a walrus running after her, an elephant in the living room playing cards, and a full water park and moat in the front yard. And that’s just the beginning…

From the brilliant mind of Mac Barnett and illustrated by rising star Elise Parlsey, comes this wildly clever cautionary tale of what the magic word really is.

Come join us for an evening with one of the most versatile, prolific, and awarded people currently working in kid lit today. See his book list below and marvel at the diversity and scope! 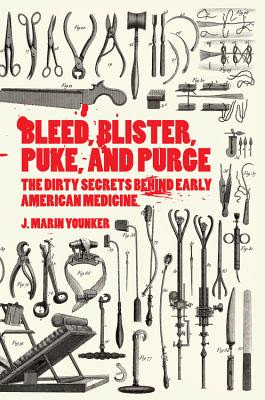 Riots over the medical use of cadavers. Public access to institutions for the insane. And full-blown surgeries without the aid of anesthetics or painkillers. Welcome to the middle ages of American medicine. Bleed, Blister, Puke, and Purge exposes the extraordinary practices and major players of American medical history, from the colonial era to the late 1800s. It's hard to believe that today's cutting-edge medicine originated from such crude beginnings, but this book reminds us to be grateful for today's medical care, while also raising the question: what current medical techniques will be the horrors of tomorrow?