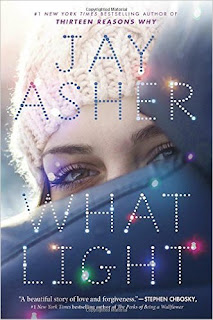 A reminder that Jay Asher is coming to town.

"Jay Asher’s first book, Thirteen Reasons Why was and is a worldwide phenomenon. It’s been translated into 35 languages, spent over 200 weeks on the New York Times bestseller list, and sold nearly 2.5 million copies since its 2007 debut, making it a contemporary classic with staying power. It’s been named a Children's Best Book by the Association of Booksellers, an ALA Quick Pick for Reluctant Young Adult Readers, and has appeared on 16 state award master lists. Netflix is adapting it into a 13-episode series. Selena Gomez is set to produce the project from Anoynymous Content and Paramount TV, with a pilot penned by Pulitzer Prize-winning playwright Brian Yorkey (Next to Normal).

Described by Asher as the answer to Thirteen Reasons Why, his new book, What Light is a love story that's moving and life-affirming and unforgettable. Early praise:
"A beautiful story of love and forgiveness."—Stephen Chbosky, New York Times bestselling author of The Perks of Being a Wallflower"