Attention! For those of you on Bainbridge or who want to enjoy a lovely ferry ride on Tuesday, this is the event for you! 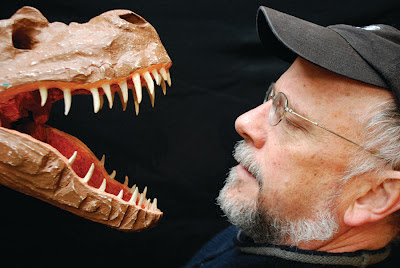 More information follows:
Author/Illustrator Richard Jesse Watson leads an interactive discussion about the making of children’s books. Watson examines how writing and illustrating for kids requires looking through both ends of the telescope. Children stargaze by reading books. Bring your pointy hat and join one alchemist in a look beyond the mists to re-enter the dream that was childhood.

More about Richard Jesse Watson: As a writer and illustrator of picture books, he has snooped around Egyptian tombs, sipped python soup in a Malaysian jungle, chewed the fat with chimpanzees, and shared breakfast with an orangutan. He has hung out of an airplane over Port Townsend, pulled rabbits out of hats, dinked around with petrified dinosaur dung, and been wounded by his T-Rex maquette—real blood. Watson’s version of The Night Before Christmas was a New York Times bestseller. The Lord’s Prayer received a Kirkus starred review, and Kirkus also proclaimed The Magic Rabbit “exuberant.”