Olympics open with a nod to kid lit

So...did anyone else sit up during their personal parade of Opening Ceremony emotions and say, "Hey, this whole 'Second Star from the Right, then Straight On 'Til Morning' section, is all about kids' books!"

I almost spilled my rose all over my lap with excitement, and even my sleepy daughter sat up, ramrod straight, when J.K. Rowling appeared in that very public setting. What other Olympics, I ask you, would celebrate J.M. Barrie, Lewis Carroll, P.L. Travers and Voldemort under the guise of the National Health Service? It was stunning, and I swear I had to raise my glass at the set. (And yes, I understand the connection between Barrie the philanthropist and the children's hospital.) 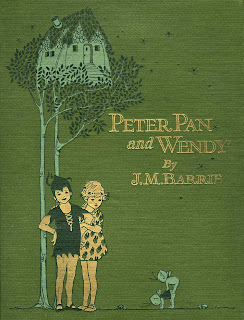 I almost expected the flag-staked Glastonbury Tour in the center of the stadium to sprout hobbits. Or Oompa Loompas. Or both. It all begs the question, perhaps best posed to Opening Ceremony director Danny Boyle, "What other books written for children by British authors could you have shown?" Captain Hook and the Queen of Hearts notwithstanding, what if Enid Blyton characters had run amok through the dormitory beds? Or Arthur Ransome's gangs of Swallows and Amazons? Charlie and Lola texting each other from opposite sides of the floor? Could the whole Tour itself have been replaced by a re-imagined Seven Acre Wood?

I, for one, would have loved to have seen Alex Rider, Anthony Horowitz's clever Bond-boy creation, accompany 007 and Her Majesty to the waiting helicopter. Or Mr. and Mrs. Twit, trapped in the looming factory towers. Or Oliver Twist, begging for food at the doors of the house party mayhem. And wouldn't there be room for Beatrix Potter's rabbits or hedgehogs or puddle-ducks? What if a giant peach floated overhead and sailed out over the fountains of fireworks? What if Paddington Bear was sitting on top of it, as a much-needed antidote to that potty-mouthed movie star, Ted?

The Telegraph published their list of the twenty greatest children's books of all time. Do you agree? Here's a list of the ten best British children's authors. Anyone else you'd like to add? Do tell!

Cheers, Danny Boyle. Your appreciation for, and mastery of, the spirit of storytelling is steeped in such a rich, wonderful British tradition. I think I might have to do some serious rereading sooner than later....